A Respect for Craftsmanship

I’m fairly certain Apple plans to introduce a new iPhone this September. The company itself paved the way when releasing new products in a celebratory manner in front of a large crowd. Apple is a trailblazer when it comes to getting the public excited for new computers and smartphones. Simply look at the crowds swarming any Apple event; everyone is eager to know what new products or updates the unicorn of the tech world will introduce. Apple products have captivated the world for decades and it doesn’t look like it’s easing up anytime soon. With the introduction of the iPhone ten years ago, Apple changed the smartphone landscape forever.

It’s hard to believe the first iPhone rolled out ten years ago. For a decade Apple has dominated the smartphone market. Of course there are other popular smartphones by different tech giants, however, the publics love for the iPhone has not wavered. In fact, it’s safe to state that Apple inspired other companies to begin producing smartphones. Apple even inspired the fashion world. After the introduction of the first iPhone, it didn’t take long for designers to produce accessories for this new tech gadget. These new tech accessories popped up alongside designer handbags and wallets in high end department stores. Everyone wanted to be a part of the iPhone revolution. It wasn’t long before fashion glossies and online influencers featured designer iPhone cases. Leather pouches and wallets also became fast selling products for the iPhone.

The fashion brand getting it right producing eye-catching and protective iPhone cases is PLIA Designs. For those out of the loop, PLIA Designs produces an edited collection of designer handbags and designer iPhone cases. Each time a new iPhone is released, they have a waitlist for their designer iPhone cases. What makes these iPhone cases different and apart from other fashion brands? For one, they are incredibly well made. PLIA’s iPhone cases are actually two-in-one. There is a strong outer PC shell which then attaches to a separate rubber case. Here’s how it works: You put the iPhone in the rubber case and then attach both to the outer PC shell. This way your iPhone is completely protected. From a fashion perspective, PLIA Designs’ cases are out of this world. Several designs are inspired by French pastries. All of the illustrations are first painted on traditional canvas by an artist. Then, the designers scan the canvases onto the back of the iPhone cases. There is a lot of work in creating these very special cases. In fact, I liken them to mini works of art. 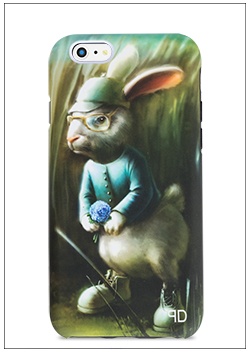 I’m incredibly excited and hopeful there will be a new iPhone announced in September. Preferably, the iPhone 8. I’m also equally excited about PLIA Designs iPhone cases. Usually they use their same famous designs and then add a few more to new iPhone updates. My favorites of their designer iPhone cases is Higgins the rabbit, the Westies, and of course the colorful macarons. Who wouldn’t want delicious French pastries encasing their iPhone? We shall see what September brings. Hopefully it’s a nice surprise at the Apple event!

A Respect for Craftsmanship